Background: In advanced pancreatic ductal adenocarcinoma (aPDAC), there is no consensual strategy for second-line chemotherapy (L2). Better discrimination of overall survival (OS) may help clinical decision-making. We aimed to predict OS from the beginning of L2 and to assess the benefit from chemotherapy among the identified risk groups.

Methods: Analyses were derived from all consecutive aPDAC patients treated at Besancon University Hospital, Besancon, France, between January 2003 and December 2013 (n=462). The association of 50 parameters with OS was evaluated using univariate and multivariable Cox analyses. Based on the final model, a prognostic nomogramand score were developed and externally validated. Patients in the external validation cohort who received L2 (n=163) were treated at three French institutions between January 2010 and April 2016. All statistical tests were two-sided.

Results: In the development cohort, 395 patients (85.5%) were eligible for L2, of which 261 (66.1%) were treated. Age, smoking status, liver metastases, performance status, pain, jaundice, ascites, duration of first-line, and type of L2 regimen were identified as independent prognostic factors for OS in L2. The score determined three groups with median OS of 11.3 months (95% confidence interval [CI] = 9.1 to 12.9 months), 3.6 months (95% CI=2.6 to 4.7 months), and 1.4 months (95% CI=1.2 to 1.7 months), for low-, intermediate-, and high-risk groups, respectively (P < .001). By applying the score in the population eligible for L2 but untreated, the chemotherapy benefit was statistically significant across all groups, but with a magnitude of the effect decreased statistically significantly from low- to high-risk groups (P < .001 for treatment and risk groups interaction term). The ability of the score to discriminate OS was confirmed in the external validation cohort.

Conclusions: This prognostic nomogram and score in patients with aPDAC can accurately predict OS before administration of L2 and may help clinicians in their therapeutic decisions. 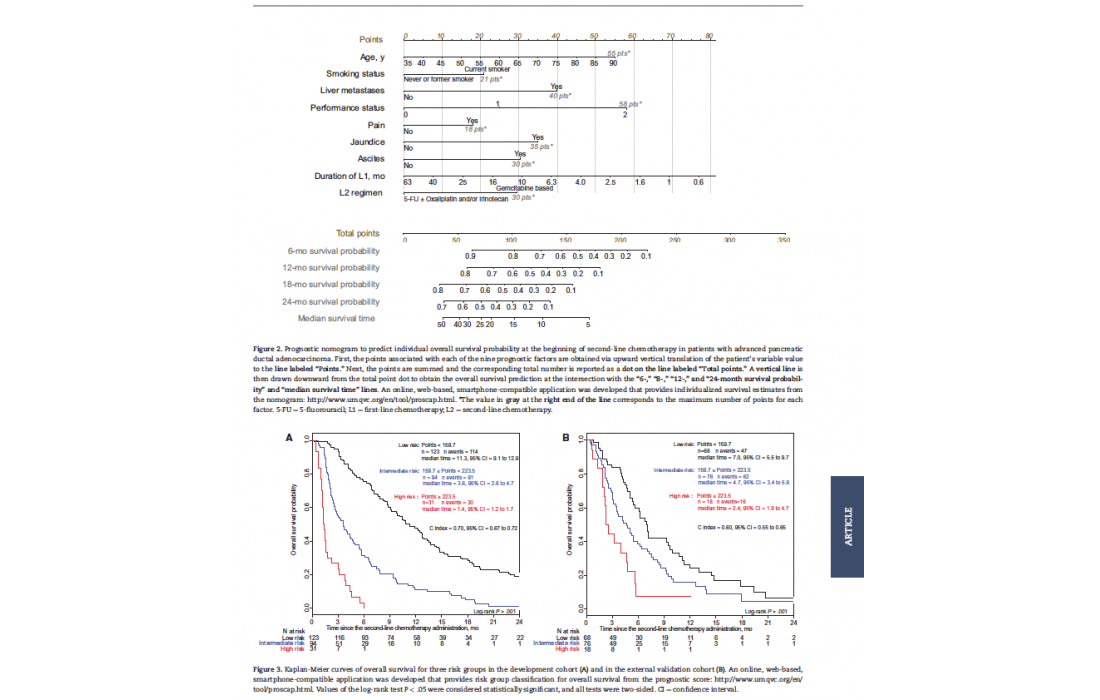