Methods We did a non-comparative, multicentre, open-label, randomised phase 2 trial in 15 hospitals and institutions in France. Eligible participants were previously untreated patients with metastatic pancreatic adenocarcinoma (previous adjuvant chemotherapy after curative intent resection was allowed if the interval between the end of chemotherapy and relapse was more than 12 months). Patients had to have at least one measurable lesion assessed by CT scan or MRI and an Eastern Cooperative Oncology Group (ECOG) performance status of 2 or less. We randomly assigned participants (1:2) centrally to 28-day cycles of either gemcitabine plus nab-paclitaxel or simplified leucovorin and fluorouracil plus nab-paclitaxel. The randomisation was by minimisation, stratified by centre and ECOG performance status. Drugs were administered in each cycle as follows: nab-paclitaxel (125 mg/m2) and gemcitabine (1000 mg/m2) as 30-min intravenous infusions on days 1, 8, and 15; leucovorin (400 mg/m2) as a 120-min intravenous infusion on days 1 and 15; and fluorouracil (400 mg/m2) as a 5-min bolus intravenous infusion followed by a 46-h continuous intravenous infusion of 2400 mg/m2 on days 1 and 15. Patients continued treatment until unacceptable toxicity, disease progression, or patient withdrawal. The primary endpoint was progression-free survival at 4 months in the first 72 assessable patients in the leucovorin and fluorouracil group, with a target of 50% for the regimen to be deemed sufficiently active to warrant further study. We did the primary analysis on the modified intention-to-treat (ITT) population, defined as all randomly assigned and assessable patients regardless of their eligibility and received treatments. This trial is registered at ClinicalTrials.gov, number NCT01964534. The trial has ended and we report the final analysis here.

Interpretation Nab-paclitaxel plus simplified leucovorin and fluorouracil fulfilled the primary endpoint in that more than the required 50% of our study population were progression-free at 4 months, with a tolerable toxicity profile. This regimen thus deserves further assessment in a phase 3 trial. 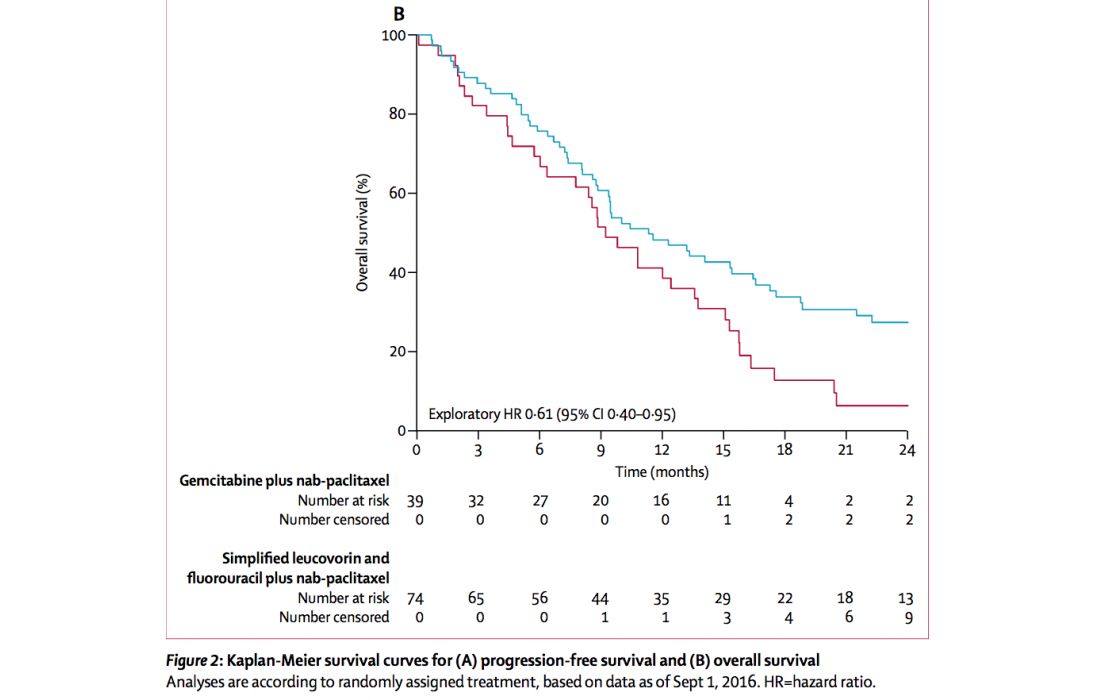