Background: Cardiac toxicity with a decrease of the left ventricular ejection fraction (LVEF) is the main side effect induced by trastuzumab. This study reports the fluctuation of LVEF over the 12 months of adjuvant trastuzumab in PHARE trial (NCT00381901).

Methods: LVEF assessment was performed every 3 months while patients received trastuzumab and after completion of treatment over the first 2 years and then every 6 months afterwards. The fluctuations of LVEF over time were described and a logistic regression model was performed investigating associated factors to LVEF perfect recovery at baseline value.

Results: A total of 1631 patients who received 12 months of trastuzumab from PHARE trial, were considered in the analysis. A total of 13 881 LVEF measurements were assessed. Baseline mean LVEF was 66.08% (standard error (SE): 0.15) and the mean relative LVEF decrease observed at 12-month was 3.61% (SE: 0.31). No clinical characteristic was significantly associated to LVEF fluctuation. After completion of trastuzumab, the relative difference progressively disappeared with beyond 30 months a relative difference value of 0.08% (SE: 0.42). Nevertheless, at 30 months, 48.53% of patients with available measures (379/781) did not fully recover their baseline LVEF value.

Conclusion: The LVEF decreased during treatment with trastuzumab and rose up after the completion of treatment without coming back to the initial values for a substantial subset. These results would suggest investigating some strategies aimed to improve the ability to achieve a full recovery. 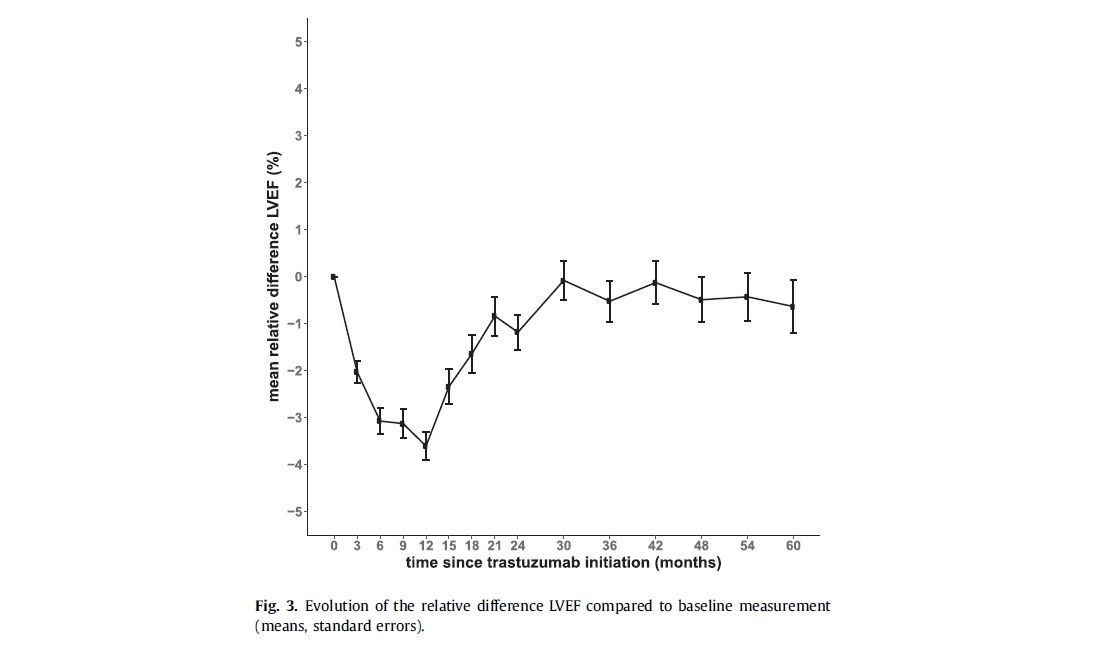