Background: In 2013, the interim analysis of the Protocol for Herceptin as Adjuvant therapy with Reduced Exposure (PHARE) trial could not show that 6 months of adjuvant trastuzumab was non-inferior to 12 months. Here, we report the planned final analysis based on the prespecified number of occurring events.

Methods: PHARE is an open-label, phase 3, non-inferiority randomised trial of patients with HER2-positive early breast cancer comparing 6 months versus 12 months of trastuzumab treatment concomitant with or following standard neoadjuvant or adjuvant chemotherapy. The study was undertaken in 156 centres in France. Eligible patients were women aged 18 years or older with non-metastatic, operable, histologically confirmed adenocarcinoma of the breast and either positive axillary nodes or negative axillary nodes but a tumour of at least 10 mm. Participants must have received at least four cycles of a chemotherapy for this breast cancer and have started receiving adjuvant trastuzumab-treatment. Eligible patients were randomly assigned to either 6 months or 12 months of trastuzumab therapy duration between the third and sixth months of adjuvant trastuzumab. The randomisation was stratified by concomitant or sequential treatment with chemotherapy, oestrogen receptor status, and centre. The primary objective was non-inferiority in the intention-to-treat population in the 6-month group in terms of disease-free survival with a prespecified hazard margin of 1·15. This trial is registered with ClinicalTrials.gov, number NCT00381901.

Findings: 3384 patients were enrolled and randomly assigned to either 12 months (n=1691) or 6 months (n=1693) of adjuvant trastuzumab. One patient in the 12-month group and three patients in the 6-month group were excluded, so 1690 patients in each group were included in the intention-to-treat analysis. At a median follow-up of 7·5 years (IQR 5·3-8·8), 704 events relevant to disease-free survival were observed (345 [20·4%] in the 12-month group and 359 [21·2%] in the 6-month group). The adjusted hazard ratio for disease-free survival in the 12-month group versus the 6-month group was 1·08 (95% CI 0·93-1·25; p=0·39). The non-inferiority margin was included in the 95% CI. No differences in effects pertaining to trastuzumab duration were found in any of the subgroups. After the completion of trastuzumab treatment, rare adverse events occurred over time and the safety analysis remained similar to the previously published report. In particular, we found no change in the cardiac safety comparison, and only three additional cases in which the left ventricular ejection fraction decreased to less than 50% have been reported in the 12-month group. 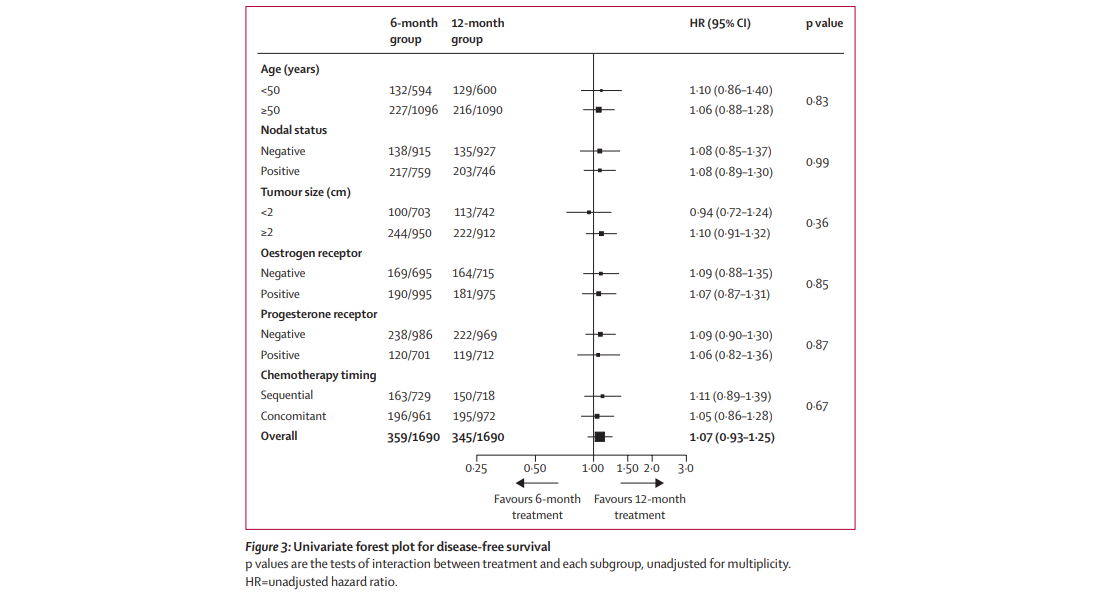